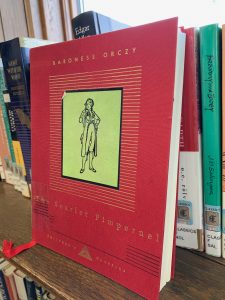 This classic novel takes place during the French Revolution. An English nobleman is rescuing French aristocrats from the gallows under the noses of those who want to execute them. Sir Percy Blackeney is known for his realistic disguises and for the small red flower, a scarlet pimpernel, left as a signature after of his rescues. He appears to all to be a fop, dandy and fool, and this disguise suits his purpose well. His wife, Marguerite, was a famous actress on the French stage. She is accosted by the French Envoy to help him unmask the Pimpernel – if she does not help him, her brother faces the guillotine. After doing so, she realizes who the Scarlet Pimpernel is, and she sails to France to warn Sir Percy before he is snared in a neck-severing trap.

I recommend this book for anyone liking action, adventure and intrigue. Its characters have wonderful character arcs, and the villain is the only one that is not fully rounded and complete. You can find The Scarlet Pimpernel by Baroness Emmuska Orczy in our adult classics, on the window shelves on our west wall. Its call number is F ORC.