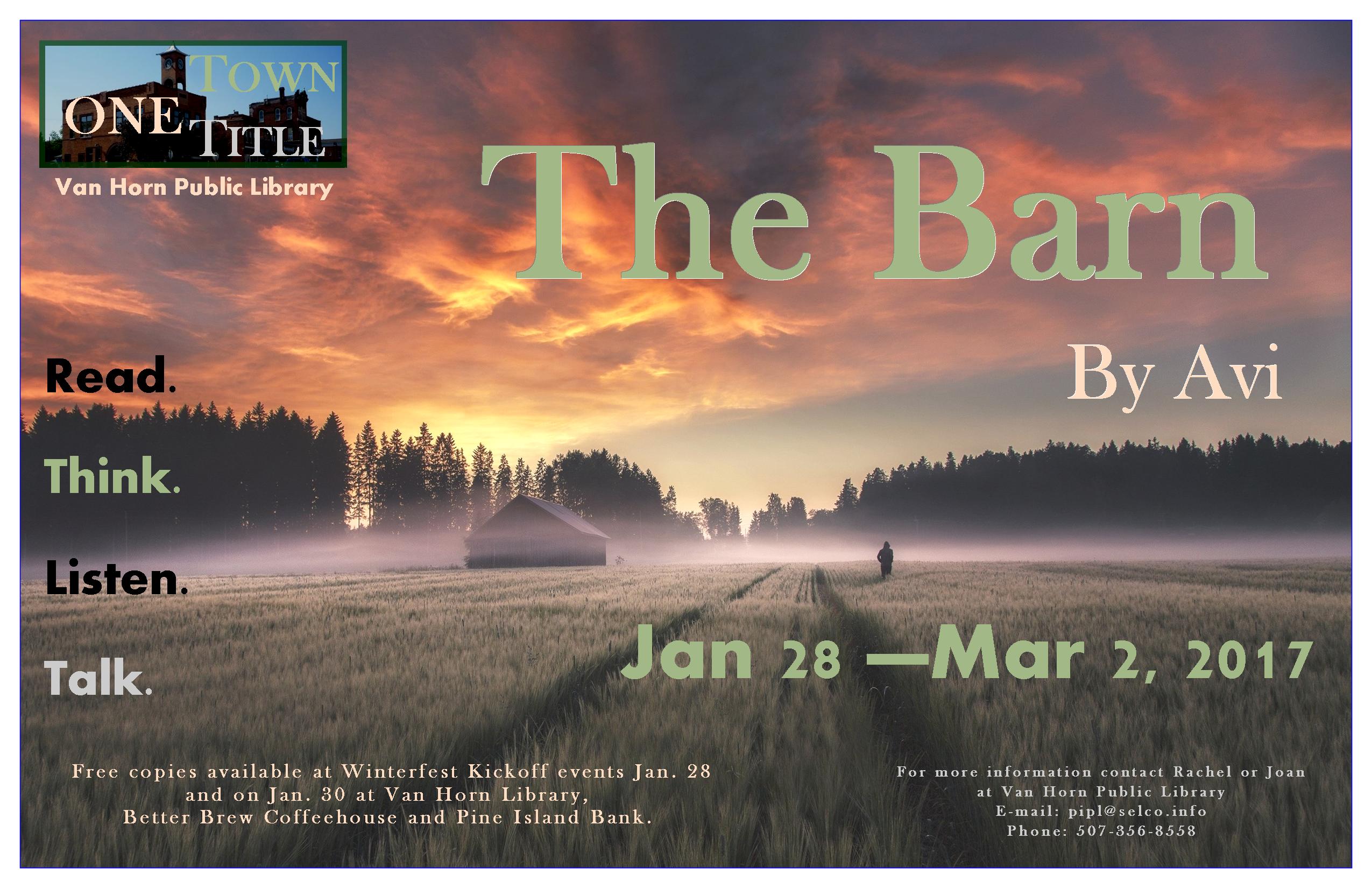 The selection this year is “The Barn” by Avi. Free copies of the book will be available at several Winterfest events (details below) on January 28th and at Van Horn Public Library, Better Brew Coffeehouse and Pine Island Bank beginning January 30th.

ABOUT “The Barn”: Ben is away at school when his father mysteriously falls ill in the spring of 1855. With no adults to help, he and his brother and sister must take over the family farm in Oregon Territory’s rugged Willamette Valley. Despite his siblings’ doubts, Ben is determined to build the barn Father had planned, in the hope of waking him from his silent, frozen state. But will it be enough?

This short beautiful story will delight the entire family.

Avi’s work spans nearly every genre and has received nearly every major prize, including the Newbery Medal for CRISPIN: THE CROSS OF LEAD and Newbery Honors for NOTHING BUT THE TRUTH and THE TRUE CONFESSIONS OF CHARLOTTE DOYLE.

One Town, One Title 2017 will kickoff January 28th as part of Pine Island’s Winterfest celebration. Van Horn Library Board Member Kim Aarsvold will join her husband Mark Aarsvold in conducting a Story Time at Better Brew Coffeehouse, 301 N. Main St. at 10:30am. Free copies of “The Barn” will be available as well as at the Winterfest Headquarters at the Pine Island Golf Course from 5pm to 8pm.

On Wednesday, February 8th the monthly Van Horn Book Club will be held at 6:00pm at Better Brew Coffeehouse, 301 N. Main St. As always, everyone is welcome to join the group for a cuppa and an informal chat about the book and the issues it brings up about family, loyalty and coping with loss.

On Saturday, February 25th from 10am to noon everyone is invited to tour two local family farms where we will learn about the past and future of dairy farming as well as get a chance for a first hand view of their facilities. The Alberts family has been in the dairy farming business since 1854 and the original Knutson Family Farms barn was constructed in the early part of the 1900’s. Group transportation will leave the library at approximately 9:45am. Sign-up is necessary. Please stop in at the upstairs circulation desk during library hours or call 356-8558 to reserve a spot.

Each year SELCO works with local libraries to build regional author tours around Minnesota Book Award (MNBA) finalists and winners.  Van Horn Public Library is delighted to be part of the 2017 tour which features regional favorite Doug Ohman. His talk Vanishing Landmarks will be the One Town, One Title Finale event at 7:00pm on March 2nd at the Pine Island Area Historical Center, 314 North Main Street.

An avid speaker, storyteller, and photographer, Doug has deep roots in Minnesota and has captured the varied essence of the state and created several photographic series on such subjects as cabins, barns and schoolhouses. Vanishing Landmarks explores the back roads and small towns with stories of Minnesota through historic buildings that are quickly disappearing. Ohman will share his own experiences visiting many of these sites from Minnesota’s Oldest Courthouse to the last Civil War recruiting station.

The SELCO Winter Author Tour project is made possible with money from Minnesota’s Arts and Cultural Heritage Fund and the people of Minnesota for Library Legacy activities.

There is no charge for the any of the One Town, One Title events or for the books themselves and information about the events as well as a list of suggested discussion topic will be included with each copy.